Assist a salty revenge-fueled pirate in his other-worldly quest to destroy the docks, or send him to a watery grave with the aid of some spectral cannonballs. This week’s Heroes Brawl is Blackheart’s Revenge, and whichever side you're on, it’s sure to be an explosive match! 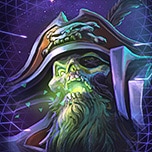