We just released a new patch for Heroes of the Storm, which marks Tracer’s pre-release, and brings a number of balance changes, UI improvements, and bug fixes to the game. Check out the patch notes below. 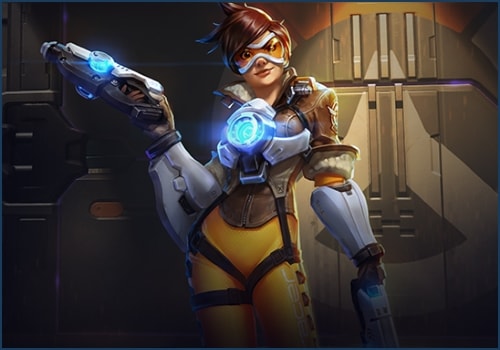 Tracer, Agent of Overwatch, is now available to players who pre-purchased a digital copy of Overwatch: Origins Edition via Battle.net! Read below for a brief overview of her Abilities.

Developer Comments: Although we are very happy with the current tuning of Infernal Shrines, we have been noticing a tendency to under-value the first couple of Punishers. In order to help incentivize players into valuing them, we have boosted their starting Health and decreased their early scaling values to compensate. While early event Punishers should be a bit stronger, any event past the 15-minute mark should be identical to those from the previous patch.

Frozen Punishers are great at zoning enemy teams but we felt they were a bit too easy to avoid without preliminary team initiation. These changes should increase the frequency in which players get rooted, while feeling a little less punishing when this occurs.

Developer Comments: We wanted to remove the triple Altar spawns when they are more likely to be game ending events. We still feel that triple Altar events offer interesting gameplay moments that ask teams to fight over 3 locations at the same time, but we don’t feel it’s a good experience when a team's Core Health is low and they don’t think they can contest the Altars to prevent a loss.

Developer Comments: The idea behind Gilnean Cocktail is that it can do a lot of damage, but the downside is that the primary target takes a lot less. It’s designed to be a poking tool to kill the backline. The old version of Incendiary Elixir completely blew out that concept, and instead made the ability a simple area of effect nuke that wasn’t special anymore. We’ve replaced it with this new Incendiary Elixir that rewards players who can show mastery of this skill shot’s unique aspects, while preserving the skill cap of the ability.

Developer Comments: Artanis’ survivability directly scales with how much uptime he has, which made a Talent like Zealot Charge incredibly powerful. The effect brought his entire kit together so well, that we’ve decided to provide part of its former benefit into baseline Twin Blades. Whereas sometimes we feel the need to cut Talents to fill a hole in a Hero’s kit, in this case we think that this is a hole that Artanis’ should be able to partially circumvent from the start. Since this is a substantial increase in his power at the start of the game, we’ve decided to revert the Health increase that Artanis received recently.