"How shall you serve me?"

- Alarak, Highlord of the Tal'darim 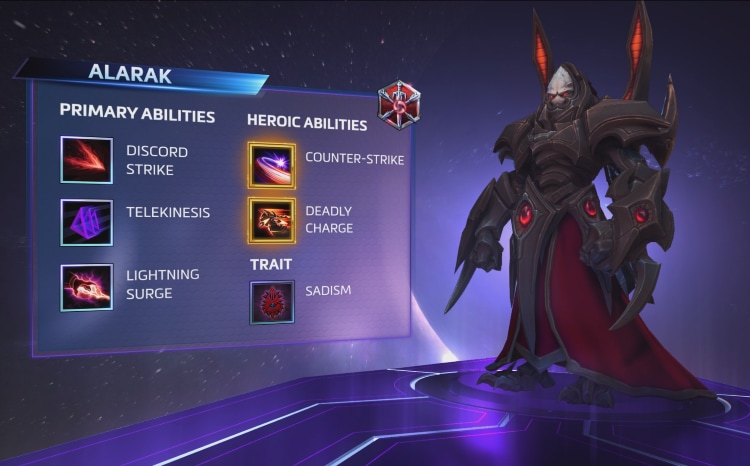 The path to Highlord of the Tal’darim was anything but easy for Alarak. In order to exact his revenge against the betrayer of his people, Amon, Alarak challenged his superiors to Rak’shir, an ancient form of ritual combat. With the psionic aid of the Hierarch Artanis' forces, Alarak toppled the previous Highlord of the Tal'darim, claiming the title and their death fleet as his own. However, such insatiable ambition and purity of focus is not easily quelled - even in the face of victory - as now Alarak turns his attention and fury upon the Heroes of the Nexus!

Alarak is the newest melee Assassin to enter the Nexus, and introduces a number of new mechanics and concepts to the game. Read on for a breakdown of a few of his talents, a spotlight video, and some tips and tricks around drafting Alarak, Highlord of the Tal’darim.

Double Cross – The utility and power of Alarak’s Discord Strike is incredible, but can be difficult to fully utilize due to the ability's shape, size, and cast time. Learning Double Cross eases these difficulties by not only increasing Discord Strike’s size, but also adding two additional points of damage and Silence effects.

Pure Malice -  Granting Alarak some extra damage through his trait whenever nearby Allies die, Pure Malice has the potential to turn the tides of battle by making Alarak into a Hero killing beast when backed into a corner. Choose this talent to exact deadly revenge in the heat of the bloodiest skirmishes.

Counter-Strike/Deadly Charge – You might notice that these talents share a name with both of Alarak’s Heroic Abilities. That is because at level 20, Alarak players have the choice to pick up their second Heroic Ability without sacrificing their choice at level 10! Taking over the Trait key (default: D), clever use of the extra Heroic Ability can take an enemy by surprise and make the Highlord an absolute terror on the battlefield.

We hope you’ve enjoyed this detailed look at Alarak, heroes. We’ll see you in the Nexus!